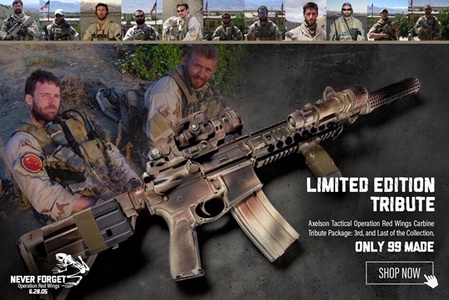 Axelson Operation Red Wings Carbine Tribute Package: 3rd, and Last of the Collection, Only 99 Being Made

Or, apply for financing now!

Purchase with monthly payments through

As low as per month

Special Edition: Operation Red Wings Carbine Tribute Package - 3rd, and Last Rifle of the Collection - Only 99 being made.

(**Discounts are not applicable for this Tribute Rifle due to the charity donations associated with it.)

Every Rifle is Built, Engraved, and Cerakoted by Jeff Axelson Personally

Too fast life seems to fly by.

So many Birthdays, So many Thanksgivings, So many Christmas’s.

Was blessed with a son and daughter during that time.

My son carries his uncle Matthew’s name. Both know of their uncle, and the Brothers lost as well.

After it all, it still seems like yesterday when I saw Matt and his Team for the last time.

A group of men, that became a Team, heading off together ready to confront and overcome any situation laid before them.

Men that acquired a Brotherhood in one of the best of ways.

This Tribute rifle has been in the works since the beginning. The last of 3, in a powerful tribute series that carries with them the story of accomplished men that sacrificed it all in the fight for Freedom.

After all, this quest to maintain our Freedoms requires tremendous costs. Costs each and every one of them was willing to pay.

From generation to generation Americans have been willing to sacrifice with blood and lives. They all answered the call over the years knowing they might not make it back.

Heroes one, and all.

Keeping the memories and the story alive has been a blessing and an inspiration to say the least.

This piece is a culmination of the years. It was a build that started in my head with the “Guardians” statue.

(“The Guardians” is the bronze statue that is the centerpiece of the Cupertino Veterans Memorial in Cupertino, CA.

The statue depicts my Brother and his Teammate James Suh. James, died when their helicopter, “Turbine 33”, was shot down trying to rescue Matt, Danny, Marcus, and Murph.

When Sandy Proctor was designing and sculpting the statue for the Cupertino Memorial he had to switch the guns that the guys were carrying on June 28 2005 to fit the sculpture parameters.

Not a big deal since they all carried and used both weapon builds throughout the deployment.

This final build we are doing signifies just that, the totality of the operation, all pieces fit together, Brothers willing to sacrifice themselves to help Brothers, at any cost.

A final rifle, that was one they all had carried before, and one, the men aboard Turbine 33 had ready to deploy against the enemy, in hopes that they would be able to bring their Brothers home at whatever the cost.

Murph's final call. Where he ended it with the last words he would speak in this life.

"Roger that, thank you."

Directly after Murph hung up, the Boys raced to get on board the choppers and bring thier Brothers home.

A couple story I’ve heard over the years.

Stories, that gives us a glimpse into a Brotherhood that few know.

The first was about James Suh, who was kicked off Turbine 33 right before take off because there was no more room on the bird. James stepped off and waited. He stayed close and then jumped aboard as the helicopter began to lift off.

Another story I've heard was about Marcus Muralles, one of the soldiers fighting with the 160th SOAR. Marcus was scheduled to leave for home that day for the birth of his child and instead of catching his flight home he choose to get on Turbine 33 and help in the rescue mission.

They knew that Turbine 33 was tag to be the first to insert into the fight and they were not going to be left out.

They wanted, like all the others on board, to be the first in the fight to help their Brothers.

Freedom Is Not Free

** All Custom or Limited Run Items are non-refundable